Criminology interns get taste of life in law enforcement 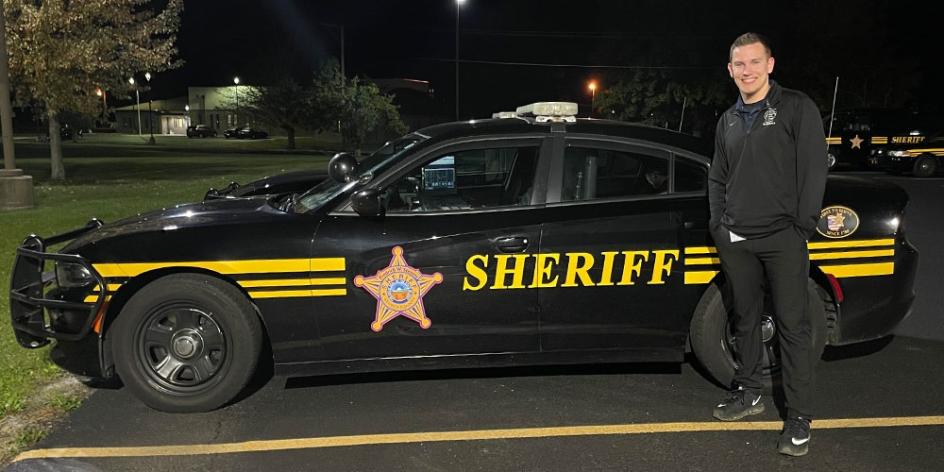 There’s nothing like the real-world experience an internship provides to give students a glimpse into their future. Five ‘Berg criminology majors – Corey Jahn, Danny Peacock, Jacob Horsch, Ericka Ray and Cole Noftz – are getting just that experience this semester, working with local law enforcement agencies to get a jump start on their careers.

Sometimes, the work is mundane. Other times, it’s downright exhilarating. All the time, it’s getting them a step closer to their own law enforcement goal to protect and serve.

As a cadet with the OPOTA, Cole will be able to pursue his career sooner – as soon as he completes the Academy. It’s something he’s eyed for a while and it’s been an intense experience that includes 780+ hours of classroom instruction and training.

Cole, who grew up in a family of law enforcement officers, was well prepared with a strong foundation of coursework in the criminal justice system at Heidelberg. His experience with the OPOTA took his preparation to the next level, focusing on the role and responsibilities of a peace officer.

Something different every day

Corey and Daniel would agree that no two days are the same at the Seneca County Sheriff’s Office. Their internships have allowed them to see multiple sides of the local justice system.

They got to experience road patrol by riding along with deputies as well as the corrections and court systems.

“This internship gave me the opportunity to see the corrections side. I’m able to see how a jail is run as well as what the life of a corrections officer looks like,” Danny says. “It has also allowed me to see the road side of things. I get to go and see everything the deputies deal with on a daily basis.”

Corey enjoys working closely with the various aspects of the office, jail, the dispatchers and road patrol, learning how the Sheriff’s Office handles crimes, complaints, warrants and calls. He didn’t even mind the paperwork. But the ride-alongs with deputies were his favorite. “Every time I would do a ride-along, I would learn something new about the job and how it works,” he says.

He also learned that “the system is a lot harder to be in than anyone realizes. These people are working tirelessly to keep everyone safe. I have seen it first-hand.”

The internship experience for Danny confirmed the appeal and excitement of the profession. “I like the aspect of how nothing is ever the same. One day, I could be dealing with speeders and the next day, dealing with an overdose.”

The world of drug detectives

Work with the Seneca County Drug Task Force is slower some days than others. But if there’s a drug buy or a search warrant being executed, that’s when it gets exciting. Ericka and Jacob have experienced some of all of these aspects during their internships.

Two of their most common experiences have been watching surveillance footage and taking notes on what they see on camera and accompanying the detectives.

“On drug buys, the intern will ride with the detective and will be taking note on everything that is said over radio traffic,” Ericka explains. “On search warrants, we are able to physically help out the detectives when they search apartments and for houses.”

They also learned some valuable lessons in communication and human nature.

“One thing that sticks out to me is that not everyone you interact with is the same,” Jacob says. “You have to treat everyone in a different manner, but you also need to use common sense and treat everyone with respect.”

Ericka has learned a lot about talking to people too, and that’s key since interviewing is such a big part of the job. “I learned when interviewing or talking to someone, it is easy for some people to talk down to the person in jail,” she says. But that doesn’t always produce the best results. “You will get more out of them and make it easier for you if you talk to them like they are an actual person.

Regardless of their internship sites, these criminology majors agree on one thing: the field has so much to offer.

Danny summed it up best: “One of the biggest reasons I want to go into this field is so I can help people.”