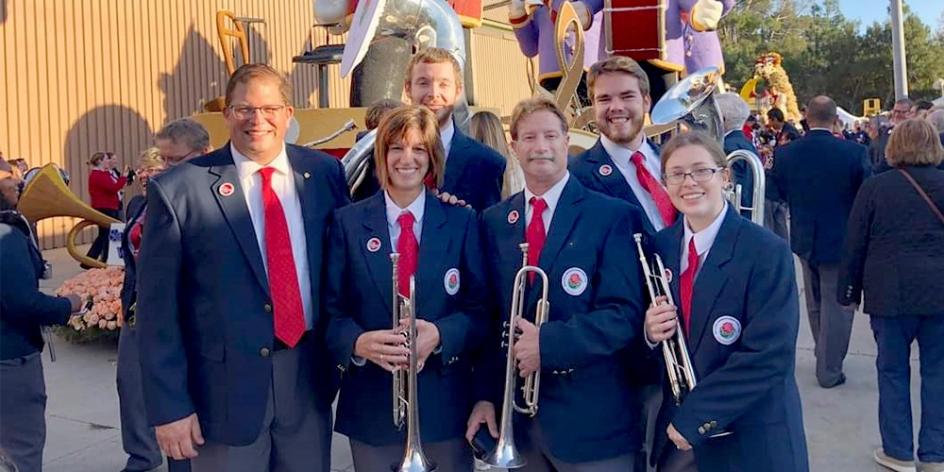 His voice is still a bit hoarse, but Jon Waters’ spirits are soaring after a “remarkable” performance by America’s Band of Band Directors in the famed Tournament of Rose Parade in Pasadena, California, on New Year’s Day. He’s admittedly still on cloud nine after directing band, which was the first-ever combo band-float pairing in Rose Parade history.

“It went so well and the band was so well received,” Jon said this morning from his southern California hotel. “The reaction on the street was just unbelievable. I was told by the Tournament of Roses Parade management that we were the hit of the parade.”

“I’ve never seen that reaction,” he added. “There were entire sections (of spectators) chanting ‘We love band directors.’”

The theme of the Band Directors Band performance was a tribute to music educators. The float that accompanied the band was a representation of a band director and three musicians – all covered with flowers in keeping Rose Parade tradition.

And while the performance of nearly 300 band directors and music educators exceeded all expectations from an entertainment perspective, the event gave the participants an unexpected lift.

“What this did for music educators and for band directors across the country will be felt for years,” Jon said. “It was just so positive.”

Participating in the band put the band directors back into the role of their students. Although some were retired, many now will have the opportunity to return to their schools with a renewed perspective – a fresh reminder that they have experienced exactly what they’re teaching their students.

“After the parade, I had grown adults come up to me with tears in their eyes, saying this was the most amazing experience,” Jon said. “And these are people who are used to parades and marching. People were just so happy to be part of it.

“It brought so much joy to the directors and the people along the parade route.”

The Band Directors Band brought together 282 music educators from all 50 states and Mexico, ranging in age from 20 to 76. In addition to Jon’s directing, the band also featured two current Heidelberg music majors, Blake Depinet, ’23, and Jonathan Hurst, ’22, as well as alumni Megan Gwirtz, ’20, Dana Willman-Leber, ’89, Dan Corfman, ’87, Denise Krebs Riley, '84, and Rosalind Runion Thacker, '01. Jon tapped Megan to also handle the social media for the band, which proved to be a sizable task.

There was also a heartwarming family tie: Blake performed in the band alongside his grandfather, 76-year-old David Arter, a retired band director from Mohawk High School.

It was no small task, pulling together all of the elements of the performance – things like travel, lodging, food, rehearsals, equipment, LA traffic. Just to get ready for the parade, six containers the size of double pallets had to be shipped to Pasadena. They were filled with uniforms, instruments, signage, raincoats – anything the band might need on the day of the Rose Parade. In California, the entourage traveled in 12 charter buses – six for band members and six for the traveling party of family members. They even had an onsite mobile instrument repair truck, which was put to use on a number of occasions.

You know that song lyric, “It never rains in Southern California”? Wrong. It certainly does, and the band experienced a weather dilemma for its rehearsal schedule.

Jon shared that the band had planned to rehearse at a college and a high school in nearby Woodland Hills, California. But rain changed all that. The first day of scheduled rehearsals, December 29, it poured. But the organizers quickly pivoted, changing rehearsal locations to a huge ballroom at their hotel.

It was the same story, different day on December 30. This time, the group was able to rehearse in a high school auditorium. “It was fine, but that does not simulate parade marching,” he said. The next day, the ensemble did get an opportunity for some rehearsal time outdoors – just in time to join all of the other Rose Parade bands for that evening’s Bandfest. Finally, on December 31, the weather broke and the band got in their final rehearsal just one day before going on live TV the next morning.

America’s Band Directors Band is a labor of love four years in the making, created to honor Jon’s friend, the late Mike D. Sewell. The two had worked together during Mike’s days as a high school band director in Pickerington, Ohio. Mike’s wife, Karen, came up with the idea to honor her husband with this convergence of talent. The first time they applied to march in the Rose Parade, they were turned down. In 2020, they were accepted but the January 1, 2021 parade was canceled by COVID-19, so plans rolled over to 2022.

Jon’s challenge was to bring together this group of music educators and quickly mold them into precise marchers with an excellent sound to put on a great show. By all accounts, that’s exactly what happened. The 5.5- mile parade route, plus an additional half mile of disbanding, was grueling for some of the band members, but they lifted each other up along the route.

By about mile 3.5, Jon noticed some of the band members getting fatigued. And then, he noticed everyone rallying around one another, giving pep talks and encouragement. “It was so cool to see,” he said.

“The message sent to the country was awesome. This was a homerun hit by all the directors.”