This week, audiences at the Edinburgh Fringe Festival are enjoying the international premiere of Stephen Svoboda’s original play, “The Penguin Tango.” The Heidelberg cast and crew of 25, accompanied by five faculty members and about a dozen friends and family, are in Scotland for six performances and to experience the single biggest celebration of the arts in the world. Sophomore theatre major Riley Gibson gives us a first-hand account of the experience in this blog. 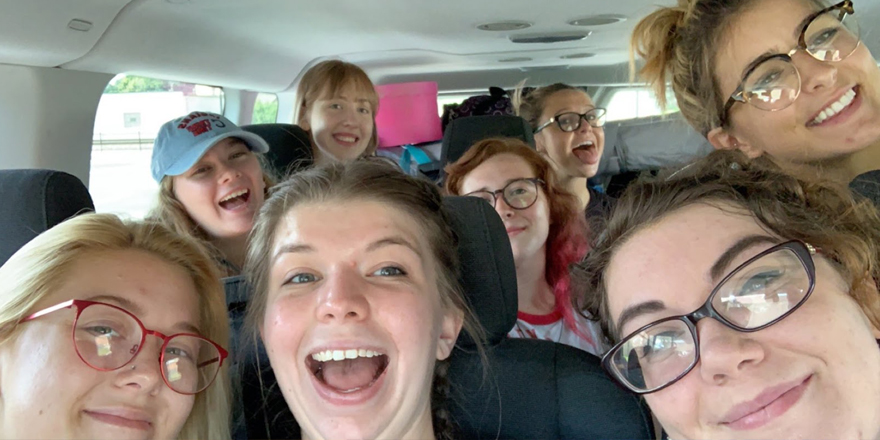 On Saturday the third, we all piled into the vans and started our trip to the Cleveland airport. Luckily, we departed from the school at 11:00, so everyone got a chance to sleep in. When we arrived at the airport, spirits were high and we were all full of excitement. As expected, it took a while to get our large group of 29 through security, but finally we were on our way to Philadelphia. In Philadelphia we had a four hour layover, which we thought was going to take forever, but before we knew it, it was time to board the plane. We departed at 9:00 pm, and because of the time change we were scheduled to arrive in Edinburgh at 9:00 am. We had all planned on sleeping through the 8 hour flight, but because of turbulence, it was a long night for everyone. 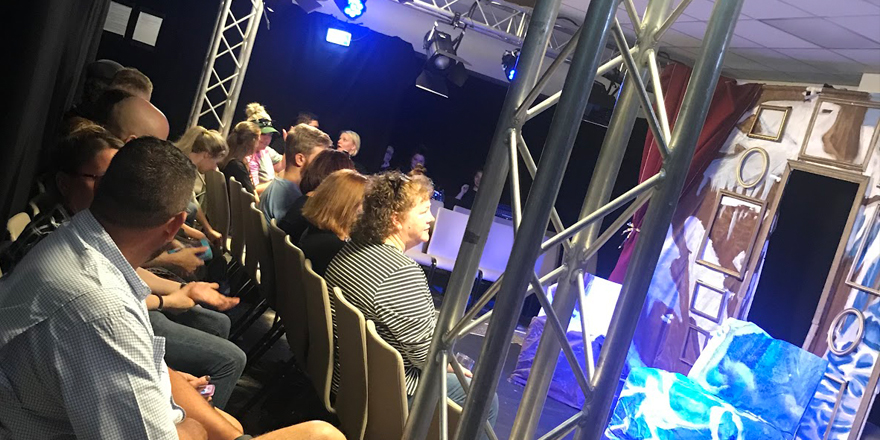 When we finally landed everyone was exhausted, but we had a long day ahead of us. Because of the time change, we lost 5 hours, so it took everyone a while to adjust to the time. As soon as we arrived, we headed right to our hostel to check in. Basically, there are four people in every room, and sometimes people stay in them with strangers. We had no idea what we were walking into, but the hostel turned out to be pretty nice. We had enough time to take our bags to our rooms, then it was off to our venue to tech the show. We had only about 3 hours to tech our entire show, and we wanted to get a run in. With jet lag setting in, we did have some mishaps, but we powered through. As soon as we were done teching, basically everyone had a quick dinner and went to bed to prepare for opening day. 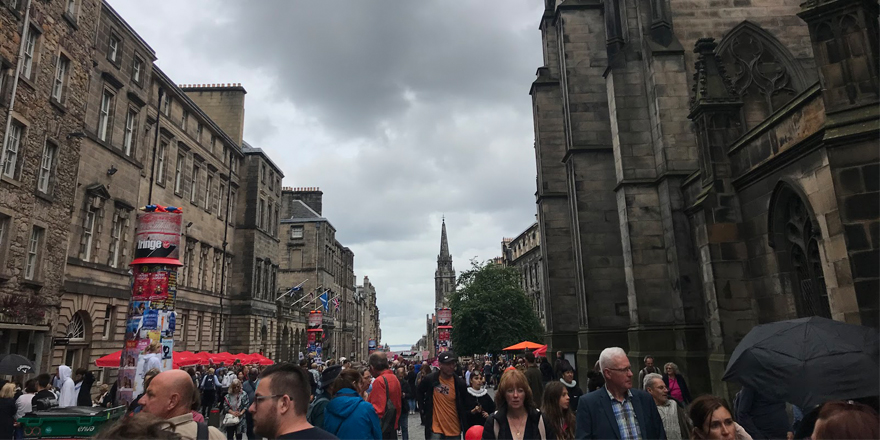 We started the day with a walking tour around Edinburgh. Our tour guide, Angus, informed us all about the history of the city. He showed us the school where J. K. Rowling got her inspiration from for the Harry Potter books. The city is gorgeous, and there are so many different shops, restaurants and different businesses. The culture is very different here, so it was refreshing to see a different way of life. After the tour, it was time for our first show, and everyone was extremely excited and nervous. We had a good audience that night, and the actors used that energy to create a really good show. After our show, we took on the streets of Edinburgh in costume to attract attention, and hand out fliers for the show. So many people stopped to take pictures, so now we do it after every show if the weather allows us to. Finally, a lot of our cast and crew went to the show It’s Aboot Adam which is a comedy written about Adam and Eve and their story. Their whole cast came to our show, so we went to theirs. This is something we continued doing to promote our show. The show had an amazing message, and was the perfect way to end the night. 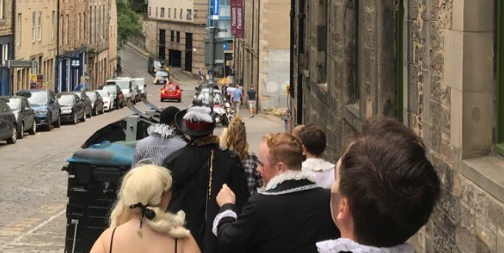 Luckily, we didn’t have anything scheduled in the morning, so everyone got a chance to sleep in before the show. However, due to a medical emergency, we had to cancel a show. Of course we were all disappointed, but we were more relieved that everything turned out to be OK. Even though we had to cancel the show, we were not going to miss an opportunity to continue promoting. All of the actors were already ready, so we took on the streets, and fliered until the rain wouldn’t let us anymore. That night, we had a haunted tour of Edinburgh’s underground tunnels. The tour was about the darker history of the town, instead of the happy things they usually tell you. The people living in the tunnels are the time were the criminals or the people who couldn’t afford to live anywhere else. Once we got into the tunnels, each room increased on a scale from 1-10, 10 being the most paranormally active. The thing that really stuck with me about the tour was that some people were born and died in the tunnels, and never even saw the sunlight. 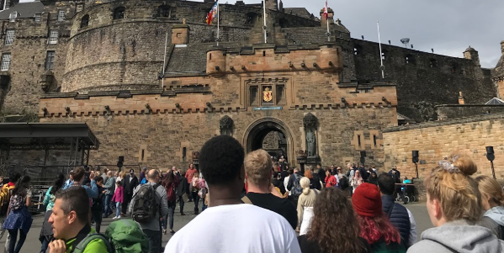 Thankfully, we were able to get back at it, and have a show this day. Wednesday the 7th is what they call “Black Wednesday.” Up until that point all of our tickets had been two for one, but now they are full price, and all of the shows take a hit. We did have a smaller crowd because of this, and because we canceled a show. However, the actors did not let this affect their performance. Despite getting low energy from the crowd, the actors had an amazing show. One thing we quickly learned about Edinburgh is that it rains a lot. Because of this, we couldn’t go out in costume after the show for fear of ruining the costumes and wigs. After the show, we got to go on a tour of the Edinburgh castle. The castle sits on this extremely high hill, so it sits above everything else in the town. The castle itself was unbelievably gorgeous, and there was so much to see. One of my favorite parts of the trip was seeing the city and learning it’s history. 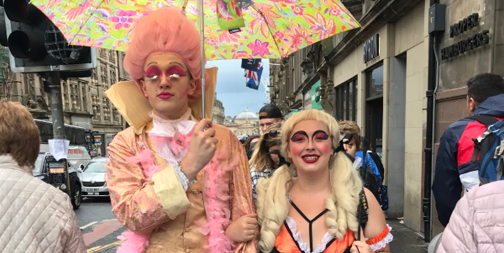 Thursday was an overall pretty easy day. The first thing we had that day was the show, but a lot of us went out for breakfast or go shopping in the morning. We had recovered from our small audience, and sold over half of our tickets for Thursday’s show. The average amount of tickets sold for one fringe show is 3-4, so we were way above that. I haven’t mentioned this yet, but we only had 15 minutes to set up the entire set, and get everything ready. Most shows had a very simple set, but not us. Ours was a collection of pvc pipe, painted fabric, chairs, picture and door frames, 2 beds and a satellite. Our set team was always working as hard as they could to get that set up in only 15 minutes, and we always did. Our tear down was only 5 minutes, and many of the workers praised us on our time. Per usual, we took to the streets after the show to promote. We made more deals with other fringe shows, so that was our evening. Many of us had an easy night, and saw as many shows as we could.

We started Friday morning with a morning hike to Arthur’s Seat. It was supposed to happen on Thursday morning, but in true Edinburgh fashion, it was raining. However, Friday morning was a perfect morning for a hike. We hiked from Cowgate district up to the chapel and then wound up at the volcano called Arthur’s Seat. It was neat because as we approached the summit, we could see the North Sea on one side and Edinburgh Castle on the other. Even though it was cloudy, the view was unbelievable. Again, the show went really well, and we had a very good audience. We had a couple important people in the audience that day, so the nerves were a little high. That night we all went and did different things. A few friends and myself went and saw a show called Humans. It was a circus show about what it means to be human, and the connections we have with people. The show was unbelievably moving, and was one of the best shows I have ever seen.

The day finally came, our last show. There was a mixture of emotions among the group: excitement, nervousness and sadness. Saturday was the largest and the best crowd we had. They had so much energy and were so into the show. The actors took that energy and produced the best show we have done. There was a little bit of relief when the show was over, but everyone was sad to see it end. Taking a show across the world was a lot harder than anyone thought it was going to be. We had the fight to sell tickets, and work our butts off the entire time. It was such an amazing experience and we all learned so much. A bunch of us went out to dinner to celebrate all of our hard work, but we had an early morning of excursions the next day so we had to keep it short.

We woke up bright and early to take a bus to loch long. It was a two-hour bus ride to the loch, but it was completely worth it. We all piled into this boat, and got to take a tour of the loch. It was so relaxing after the busy week we had just had. From there we went to Stirling Castle where we got a guided tour. I like this castle a little more, but because we learned more history, and there was more to see. Everything in Scotland was beautiful, and had amazing views. We toured the castle for around an hour and a half, but I could have stayed there all day. We got back from the excursions at around 5, and mostly everyone grabbed dinner, saw a show and went to bed because we were going to have an early morning.

We had to meet in the lobby at 6:45 that morning to head to the airport. It was a very bittersweet feeling because we had made so many memories together, and it was a last goodbye to the seniors. As a department, we are all very close already, but having experienced this together, it has made us closer. On the other hand, many of us miss our parents or our pets and were ready to head home. Again, we had around a seven-hour flight to Philadelphia after we finally made it through security. I’m not sure about anyone else, but this one was a lot better than the first. Then, we had a two- hour layover until we could finally land in Cleveland and head home. The vans reached campus around 7:45 and we all went our separate ways until most of us move in in 4 days. This trip was an amazing experience, and I have learned so much not only about myself, but my profession. I would go back in a heartbeat.